BACK TO WRITING MENU

Hip hop is dead, so has declared NAS on his new album “HipHop is Dead“. Were these the fighting words that caused the S1W (Security of the First World)  to storm the Docks’ stage followed in close pursuit by Chuck D on Friday night’s CMW showcase event? An eager crowd mulled in the dark awaiting the arrival of mythical hip hop figureheads Public Enemy. Local historians/heroes Michie Mee and Maestro (Fresh Wes) helped to warm up the stage, moving the crowd in a much needed revelatory motion towards the true resurrection of hip hop. As the combat boots of the S1W marched onto the stage, the crowd knew that this was a “take no prisoners” event to be remembered for a very long time. Beats building, crowd on the verge of explosion, Chuck D shot onto the stage to the roaring approval of an eclectic crowd. Not merely hip hop heads, the crowds diversity attested to the fact that Public Enemy is a group for the people, ALL people. 2 songs into the set, which included a DJ, guitarist and live drummer, the simmering amongst the crowd was about the whereabouts of the clown prince of hip hop, Flavor Flav. Not to disappoint, or to be missed, Flavor Flav bum rushed the stage in a Sun marked Yellow hoody and omnipresent oversized clock, set to his own time of coarse. The crowd fell over onto themselves, roaring their approval, Public Enemy had arrived. A medley of their greatest hits, the soundtrack for much of the 80’s and 90’s,  left no musical stones unturned. Every song they played was necessary, for to leave out even one was to deny the crowd their due. Crowd pleasing favorites such as Shut Em Down, Fight The Power, 911 Is A Joke and Don’t Believe The Hype  made heads and arms bounce in unison. Age has done nothing to reduce the Political/social overtones inherent in their work, PE’s words pierced as effectively as ever. Posing, strutting, COMMANDING the stage, the rare appearance of Public Enemy in the flesh, mandated every eye in the cavernous Docks complex to remain tightly focused. Looking through the throngs of the crowd, mesmerized eyes abounded, blinking became optional as no-one wanted to miss even one second of this classic show. Public Enemy showed why they have attained the lofty, respected heights that they occupy in hip hop. Even the isolated location of the docks couldn’t keep the thousands from praying at this hastily erected temple. NAS has declared hip hop to be dead, but Public Enemy not only resuscitated it, but gave it back its arms and legs, ready to fight for its life. Save for a late start time, brought on by slight techno glitches, there was no flaws in this show. Professionalism was in such demand that Flavor Flav commanded that anyone on stage making a mistake would be faced with a penalty of doing pushups in front of the crowd, and even he, stringy arms and all paid his push-up dues when he absent-mindedly forgot a lyric. As the crowd pumped their fists in the air to “fight for Your Rights”, a collective smile spread from corner to corner of the Docks, music was good, very good, and in the case of Public Enemy message, ever so necessary. Perhaps hip hop isn’t in such dire straits after all, just so long as Public Enemy “fights for OUR rights” for true hip hop. 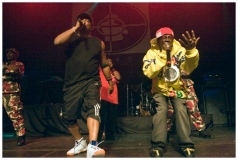